How do I reserve a puppy/get on the list?
First, you will need to choose a puppy that is listed as available or choose an upcoming litter of your choice. Second,  submit your application and reservation fee. We will then send you a receipt/contract for the chosen puppy or future litter. We do our best to provide a puppy within 6 months of a reservation fee for upcoming litters (if not sooner). Contact us through our contact page via email, text or phone call. We can answer any questions you may have.
How far in advance will you accept a reservation fee on a litter?
We take reservation fee’s up to 1 year in advance. Puppies are picked in the order in which fees are received; most of our puppies are sold before they are born. We do reserve the right to the 1st pick of each litter.
Can I make payments on my puppy prior to delivery/pickup?
Yes, after you pay your reservation fee you’re able to login and select “partial payment” and pay any amount you would like up until you pick up your puppy at 8 weeks. If a puppy is not paid in full prior to pick up; you must pay the remaining balance in cash.
Is my litter reservation fee refundable or transferable to a different litter?
A holding fee is non-refundable. But you are able to transfer to a future litter anytime within the one year that a reservation fee is received. We understand that life happens sometimes. We really try to work with all of our families for the transition of their new puppy to be an ideal one and the best time possible.
Is there an application/review process?
Yes, please see our application on home page. We review all applications and have the right to refuse the adoption of a puppy to anyone. We will let you know within 24 hours of receiving your application if you have NOT been approved and refund your reservation fee.
How many reservation fee's do you take on each litter?
We take 6 deposits per litter. We try to take fewer deposits than we expect the mom to have, so we do not disappoint anyone and that those that have planned ahead get their ideal gender/color. Therefore, we occasionally have more deposit spots open up after the litter is born. If you are certain on gender/color, and we don’t have your preference available (that is something that we just cannot predict), then we can talk about one of our upcoming litters and move you to another litter for an ideal match.

What if there aren't enough puppies for everyone on the list?
If the mama dog does not have enough puppies to accommodate everyone on the litter list, we will than transfer deposits to another upcoming litter of your choice and/or puppy preference./su_spoiler]
What is the price for your puppies?
Please see a full list of availabilities and options under the puppy tab. Our puppies range from $2400-$5000. A $400 reservation fee is due at the time your application is accepted. The remainder is due prior to pick up at 8 weeks, via PayPay, Venmo, or cash at the time of pick up. We can also send you a link to pay using our credit card platform (Stripe) on our website. Checks are not accepted at the time of pick up.
Do you ship/fly/deliver dogs out of state?
Yes, please visit our Deliver/Shipping information on the home page.
Once we have paid our reservation fee, do we get to choose our puppy or is it chosen for us?
A little bit of both. We really take all the information that is given to us from the application to narrow down your puppy choice. Once our puppies turn 5 weeks old we are able to conduct personality and temperament testing on each puppy. At this point; we will set up with you to come and pick out your puppy in the order of deposits taken to officially “pick out” your puppy. We sometime will narrow it down to 3 puppies for you to choose (more than that based on your criteria can get overwhelming).
When can we get our puppy?
Once he/she turns 8 weeks old.

What medical care do you provide for the puppies from birth to 8 weeks?
Our puppies are dewormed every two weeks starting at 2 weeks of age and have their first vaccine at 6 weeks of age. Our puppies also take their first visit to the vet at 7 weeks. We will provide all paperwork showing vaccines, amounts and when administered with their ownership paperwork at the time of pickup.
What if something happens and my litter doesn’t take or does not survive?
There are some times when a female does not get pregnant, or there are complications with the pregnancy that cause the puppies not to survive. Of course, we do everything we can do to prevent these situations from happening, but sometimes there is nothing we can do and it happens. In these situations, reservations will be moved to the same mother’s next available litter or can move to any other litter of your choice.
Do you offer a health guarantee?
Yes! We have a 1- year health guarantee automatically; or a 2-year health guarantee if new owner commits to using NuVet supplements. Upon the receipt of your reservation fee, you will receive information on NuVet Supplements which we actively give to all of our adult dogs and puppies. Also, visit our resource tab for more information on NuVet and to place your order.

Do you allow visitors to your property?
Yes! We allow you to come visit our property once your puppy turns 5 weeks old to pick out your puppy. We will set up this appointment up with you.
What type of food do you feed the puppies?
Our doods are so lucky and we feed them only the best! Please ask your breeder and they will send you a link with their choice food they are feeding your pup. We will also send home a starter bag of food for your puppy to stay on the same diet and/or either allow you time to order more food online or transition to the food of your choice. Please note, you never want to switch your puppy’s food cold turkey, but transition over 5 days at least.
Do the puppies get to play outside?
Yes, weather permitting. We typically keep the pups inside and close to their mama up until they open their eyes around 3 weeks. Young puppies cannot regulate their body temperatures very well, so time outside completely depends on the time of year and weather. However, if they aren’t playing outside, they are playing inside for sure. Our goal is always to get the puppies outside with new textures and surroundings between 4-5 weeks.
How much time do the puppies spend with their mother the last few weeks before going to their forever home?
Our moms come and go from their puppies as they wish all throughout the day. We certainly keep the mom and her pups in the same vicinity and strive for healthy weaning from nursing to puppy food. Moms teach puppies important life lessons about being a dog and how to play nicely with others.
Can I send a blanket or towel to you so that the scent of the litter is on it?
We’ve got you covered! With each of our puppies, we will send home a cloth animal with the scent of the mother and siblings on it (no extra charge). This has been a proven method of transitioning puppies with a security scent. You will be surprised how your puppy will grow up into a grown dog and still treasure their cloth animal!
Do you give breeding rights?
No, we sell our puppies on a strict spay and neuter contract. There is a fine if you breed your Downeast Designer Doodle without breeding rights.
Am I guaranteed to have a no shed and allergy free dog?
No. While it is very difficult to tell with 100% certainty if you will have an allergic reaction to your doodle or not, we try our best in our breeding practices to produce a “no shed” dog as much as possible.
We understand the big reason many people purchase doodles is to have an amazing companion without all that hair everywhere. That is why we do our best to ensure the least amount of shedding as possible, but stating that our dogs are 100% shed free is not possible, it is still a dog. Most websites list an F1B as the lowest shedding generation, and while an F1B is a very low-shedding generation, it is no more than other later generations. Curlier coated dogs often shed less than wavy ones as wavy coated dogs (like an F1) often have more golden retriever bred into them. However, this does not mean that you cannot have a wavy-coated Goldendoodle that doesn’t shed. If you are looking for a wavy-coated doodle that is still low-shedding, we have them and can help you find the best litter for your allergy needs.

What are all the different coat colors & patterns?
Doodles come in a beautiful array of colors and patterns! They don’t have to be golden to be considered a goldendoodle. Please scroll through our gallery on our homepage. Descriptions of each color can also be found below:

Solid: If the dog’s coat is all the same color, it is qualified as solid. Occasionally, a solid colored puppy will have a small white marking, generally on it’s chest or toes. These markings are ‘abstract’ and do not disqualify the dog from being a “solid” color. Adds a cute flair for sure.

Parti: If 30%+ of the dog’s body is white, it is considered a parti color. Parti colors should not fade.

Phantom: Phantom refers to a dog’s markings and phantom marking is similar to that of a Rottweiler or Doberman. Phantom colored goldendoodles, poodles, and bernedoodles generally have a lighter colored marking on their eyebrows, chests, and legs. Phantom coloring can sometimes blend into the dogs coat and become less distinct as the dog grows. Phantom can be combined with parti, sable, or brindle coat colors.

Sable: Sable is a mixture of grey, brown, and black colorings and can sometimes turn out looking brindle when the dogs coat is shaved down.

Brindle: It’s generally easiest to tell if a dog is brindle when shaved down. Its coat will look almost tiger-striped, generally grey, black, and/or brown.

Tri-colored: A puppy is a tri if it is black with distinct white chest and brown eyebrow leg markings.

What is a Goldendoodle?
The hybrid cross of a purebred Golden Retriever and a purebred Poodle creates the Goldendoodle. This breed was started in the early 1990’s as guide dogs for the visually impaired with allergies. Retriever breeds have been a popular choice as service dogs because of their intelligence and temperament, but their fur can cause real issues for allergy sufferers.

Adding the Poodle to this breed helps minimize allergic reactions because of their hypoallergenic hair. While we cannot guarantee that no one with allergies will have a problem with Goldendoodles, we can say that most people have reposted less severe reactions or not at all to them. Goldendoodles are friendly and outgoing. They are super intelligent and easily trained. They are also as happy indoors as they are outside. Their fun-loving personalitities and gentle nature truly lend themselves to being the best dog you will ever own! 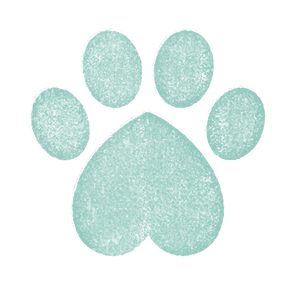 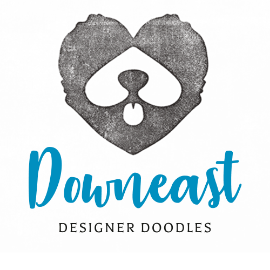